within chaotic times, things sometimes change from one day to another and in this case, also for good! Thanks God!

We will now stay here in our current location until our new space will be ready. 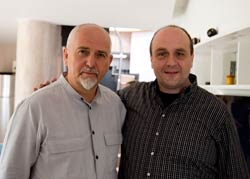 Brauner Microphones is once again supporting the Haldern Pop Festival taking place from August 13th to 15th, 2009, in Rees-Haldern, Germany. This small festival is famous for its special, intimate atmosphere and a great selection of artists from newcomers to well-known bands.  This year's line-up include The Soundtrack of Our lives, Paolo Nutini, William Fitzsimmons and many more.

Brauner Microphones can once again be found on the "musikmesse" fair in Frankfurt, Germany, from April 1st to 4th, 2009. We are looking forward to you visiting us in hall 5.1, booth A48. You will be able to have a close look at our established product line as well as some new releases.

Browse our archive for older news.